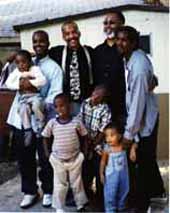 A String of Pearls
Camille Billops & James Hatch
2002
Color
56 minutes
US
Trailer and More
-  Watch Valerie Smith Keynote on Billops & Hatch Film Festival
-  Still Raising Hell Online Exhibit
A String of Pearls
With this film, Camille Billops completes her family's trilogy - three documentaries that cover more than thirty years: "Suzanne Suzanne", shown in the New Director's series at the Museum of Modern Art in 1982 revealed how abuse of Suzanne by her father led to her drug addiction. "Finding Christa", winner of the Grand Jury Prize at Sundance in 1992, told how Camille's unwanted pregnancy led her to put Christa up for adoption and how Christa returned twenty years later to confront her mother.

Now, "A String of Pearls" turns the camera to four generations of men in Camille's family and considers why their fathers died so young. The camera turns to the grandsons, Michael and Peter. Both are handsome, winsome and in jeopardy. Both are without education, jobs or skills to earn a living, and both have children they cannot support. We want them to live, but two doctors from the local hospital trauma ward describe the streets of Los Angeles as a war zone, where the US military sends its doctors to learn about gunshot wounds. In "A String of Pearls", Camille takes a hard look into the hearts of the black men in her family. In this film, love blooms.

"For Camille Billops, autobiography is a means to a new black documentary style." - B. Ruby Rich, Sight and Sound Magazine