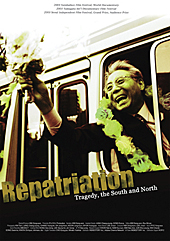 In the spring of 1992 documentary filmmaker Dong-won Kim met Cho Chang-son and Kim Seak-hyoung, two North Koreans arrested by South Korean authorities years before. Convicted of spying for the North, they were incarcerated and spent thirty years as political prisoners. These men, and many others like them, underwent conversion schemes in prison that involved torture: those who renounced their communist beliefs were released from prison early. The others, known as "the unconverted," served their full terms. None could return home to the North, however, until the turn of this century, when tensions between North and South eased significantly. Director Dong-won Kim followed these men for ten years, documenting how they survived -both physically and psychologically, the dehumanizing time spent in prison, and their quest, once released, to finally go home.

"Repatriation can be seen as an extended home movie. The voice-over narration in the first person bares Kim's inner toughts including prejudices, uncertainties and affection for the old men, lending a diary-like feel to the documentary. Repatriation is an important case study of how a personal essay combines with public discourse and goes on to generate a political influence that moves beyond that public dicourse." - Nam In-Young, Documentary Box Journal 2005
"Ultimately a story about the indomitable human spirit, Repatriation is an extraordinary chronicle of human drama in the context of political change, and a testament to those who stubbornly, and at tremendous cost, fi ght for what they believe in." - Diane Weyermann, 2004 Sundance Film Festival
"This deeply personal tale is neither conventional profile in courage nor routine political polemic, but rather a carefully balanced, constantly evolving portrait of life then and now on both sides of the world’s only still-divided country." The director KIM always keeps one eye fi xed on a broader portrait of contemporary Korean society, offering a vivid sense of what it means to live in a divided nation and why the dream of reunifi cation remains such an important one for so many Koreans on both sides of the border. - Scott Foundas, Variety
"How do men who have spent so long incarcerated reenter the outside world? How is one affected by a cultural conversion four decades in the making? Kim Dong-won narrates throughout the fi lm, providing an insightful perspective." - 2004 Amnesty Int’l Film Festival
"The director has labored over the subject matter intensely, harbouring special love for his subjects. That evokes a lot of empathy from the audiences toward the fi lm. The audiences is able to witness the director himself living side by side with the political prisoners, starting a chemical reaction with the audiences as the subject being shot and the subject shooting are revealed together. Such a work is hard to achieve." - CHO Young-kag, 2004 Jeonju Int’l Film Festival
"How were these men able to survive thirty years of systematic torture? And how have they gotten along since regaining their freedom? This highly personal documentary fresco looks into these questions and many more besides." - 39th Karlovy Vary Int’l Film Festival
"The heart-scraping Korean doc Repatriation follows a group of elderly ex-prisoners jailed in the South for decades after being caught spying for the North. Tortured, many renounced Communism; upon release, those who remained unconverted lived (and sometimes dies) in the South before heading home, where they were hailed as heroes." - Ed Park, Village Voice
"Repatriation is awed by the stead-fastness of the former prisoners, so much so that it chooses to tastefully ignore the fact that update of pro-Soviet propaganda, so out of touch with reality it would almost be humorous if it weren’t the service of totalitarianism." - Saul Austerlitz, New York Press
"Trapped in the middle, between North and South, idealism and cynicism, KIM watches as the “grandpas” endure both intra-family confl icts and tearful reunions. Repatriation is an emotional, complex, and confl icted cry from a divided country." - Anthony Kaufman, indieWIRE
"Repatriation is not ego-driven in the way that some recent American documentaries are, but it recognizes that any coherent appraisal of Korea’s North-South problem and the wretched history of South Korean politics needs to be anchored in the changing subjectivity of an engaged observer. A fi lm of great candour, this is the most searching account of modern Korean politics ever made." - Tony Rayns, 23rd Vancouver Int’l Film Festival
"Kim's two-and-a-half hour film is a political, highly contemporary, meditative and, at the same time, exciting document of a cultural encounter." - 47th Int’l Leipzig Festival for Documentary and Animated Film
"By starting his documentary at a time when most news agencies were switching off their cameras, director Kim Dong-won gives us a rare insight into the complete story of these men and how their lives have been shaped by their convictions." - Darcy Paquel, Darcy's Korean Film Page