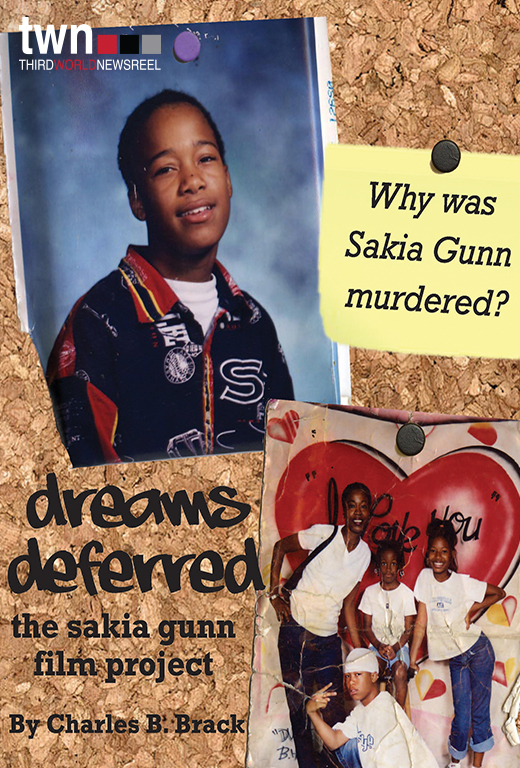 This documentary tells the little known story of Sakia Gunn, a 15 year old student who was fatally stabbed in a gay hate crime in Newark, New Jersey. Sakia was an Aggressive, according to GLAAD, a homosexual woman of color who dresses in masculine attire but does not necessarily identify as female-to-male transgender. Sakia held promise as a basketball player and was an "A" student, looking forward to becoming a senior at Newark's West Side High School. On the night Sakia was murdered, she and her friends were returning from socializing at New York City's Greenwich Village piers, at Christopher street, a popular spot for Lesbian, Gay and Transgendered youth. Two men targeted the group at a Newark bus stop station first flirting with and then propositioning them. The girls rebuffed the sexual advances of the much older assailants. Words were exchanged, a fight ensued, and Sakia was stabbed. "Sakia and her friends didn't mean anybody any harm that night. They were coming back from having fun at the Pier in New York, a place where they felt safe to be who they were." says Laquetta Nelson of the Newark Pride Alliance.

"Dreams Deferred: The Sakia Gunn Film Project" depicts the homophobia that caused this murder and questions the lack of media coverage of the murder of a Black Gay teenager. "This 15 year old black lesbian was murdered, and I didn't know about it", says activist Swazzi Sowo of Black Rap in San Francisco. The documentary follows the reaction of the Newark community where several rallies and vigils were held, galvanizing the community and prompting several LGBT organizations to form, including the Newark Pride Alliance and Sakia Gunn Aggressives & Femmes, as well as a scholarship fund in her name. May 11, the day Sakia was murdered, was declared by the city of Newark's Mayor as "No Name Calling Day".

The story unfolds with the testimonies of Sakia's family and friends during the sentencing hearing of the murderer. The hearing is inter-cut with interviews of LGBT community leaders, opinions of people in the community, interviews of Sakia's best friend, Valencia, and exclusive footage of Sakia's vigil. "Dreams Deferred" pays homage to this young Aggressive and exposes the sensitive issues not often addressed regarding gender-identity, homophobia and racism.

"The fact that a young woman, was waiting for the bus and this happened to her is enough to outrage anyone." - Clarence Patton, NYC Gay & Lesbian Anti-Violence Project
"The way the film alternates among the courtroom scenes, the interviews with family and friends, the coverage of the public rallies, and the interviews with others creates a moving and rich account of Sakia’s life and her community, as well as the tragedy of her murder. It is a loving tribute to Sakia in her fullness, and a call to action. We hope many others will have the opportunity to see this film." - Andrew S. London & Margaret Himley, Co-Directors of Syracuse University LGBT Studies Program
"An inspirational and moving documentary that drew concerned community members from all over the San Francisco Bay Area. As a matter of fact, by the time the screening was over, there wasn't a dry eye in the house." - Joe Hawkins, Oakland Int'l Black LGBT Film Festival
"This compelling documentary raises tough questions about a biased media that ignores hate crimes against African Americans, while also examining the circumstances surrounding Gunn's tragic death, the lost promise of her young life (she was a straight-A student and a promising basketball player), and the difficulties facing inner city youth who choose to be openly and unapologetically homosexual... A fine asset for collections with an interest in LGBT issues, media studies and race relations, this is highly recommended." - Phil Hall, Video Librarian Magazine
"Recommended. Although the title leads us to believe that the documentary is solely about Sakia Gunn, it tells a much wider story about the lives of Sakia and others who live similar lifestyles as aggressives, and the bias and potential violence they face. The documentary reminds us that LGBT youth are often dismissed, ignored, or rejected and frequently subjected to violence. They need safe spaces where they know they are not alone." - Janice Wilson, Eastern Connecticut S.U., Educational Media Reviews Online (EMRO)
"An emotional examination of the Gunn case." - Sewell Chan, New York Times
"Race, homophobia, and gender identity examined in powerful documentary… Sakia Gunn's story must be heard" - Cherry Grrl Magazine
"Her story demands attention and compassion, not just for Sakia, but for all of the young Black women and men who pay the price of intolerance, shame, hate and silence." - Newark Black Film Festival
"Sakia Gunn was murdered on the streets of Newark for her sexuality. Unlike the Matthew Shepard story, few people outside of Newark have heard of his murder. There are no made-for-cable films about Sakia, no speeches at big fundraising dinners. The difference may be as simple as the color of Sakia's skin." - Dudley Best, Qfest, 2009
"A poignant story that needs to be told, and Brack makes the case that it was poorly reported at the time of Gunn's death." - Joan Pedzich, Library Journal
"Wrenching footage from the trial of Sakia’s self-confessed murderer is interspliced with testimonials from citizens of Newark; Sakia’s queer community; her immediate family, and from community outreach workers. Appallingly to them is not only Sakia’s murder, but the fact that in the months that followed, the media paid minimal attention to it. DREAMS DEFERRED is a powerful, devastating, documentary about community, tragedy, and a young woman’s life ripped short by the senseless violence of a stranger." - Reelout Queer Film & Video Festival
"Featuring footage of the criminal trial, community activism, and interviews with community members and educators, Dreams Deferred prompts student discussion on various issues including masculinity, heterosexism, racism, and cissexism... The absence of a narrator creates an intimacy through which one can bear witness to these crimes, compelling the viewers to empathize with the subjects... The take-away message from Dreams Deferred is to empower queer youth of color and to hold communities responsible for addressing diversity and inequalities." - Reese C. Kelly, Films for the Feminist Classroom
"Brack’s DREAMS DEFERRED: THE SAKIA GUNN FILM PROJECT raises awareness on hate crimes that occur within the black community. Homophobia amongst black people is still a subject that is considered too risqué for an open, honest discussion. Are we willing to keep ignoring the issue until another teen’s life is taken from us?" - Shannon J. Effinger, Society HAE
"As with Shepard, and Brandon Teena, Gunn’s life was memorialized on film in Dreams Deferred: The Sakia Gunn Film Project, a powerful doc that dissects both the homophobia that caused this murder and questions the lack of media coverage of her murder." - Diane Anderson-Minshall, The Advocate