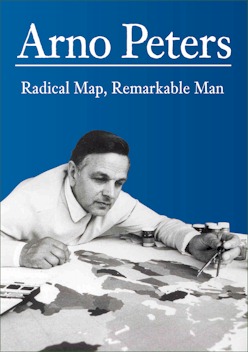 Special Educator's DVD & Map Pack
"We don't need a new map, we need a new view of the world"-Arno Peters

One of the most controversial images of the world, the Peters Map was first introduced by Dr. Arno Peters in 1974, and generated a firestorm of debate. Peters was one of the first to assert that maps are unavoidably political. His map claimed to show "Fairness to All Peoples" providing an area accurate portrayal of the world. Today, this equal area map continues to have passionate fans as well as staunch critics.

ARNO PETERS: RADICAL MAP, REMARKABLE MAN documents the fascinating story of how the Peters Equal Area World Map came into being. Includes scenes from The West Wing show that featured the map as well as cartographic critiques that show the tension and conflict that the Peters Map generated amongst the cartographic establishment. This DVD is a fantastic resource to cover a variety of social justice issues, which were Arno Peters' motivation to create his innovative map.

Print Resources: Peters Map Explanation, journal articles, Arno Peters Tribute, reactions to the Peters Map, State of the Village Report, The Politics of Maps, and Why it takes more than one map to see the world

"Absolutely fascinating stuff. Every now and then you are exposed to something that is truly amazing… The DVD is right on target in addressing the social ills of our world." - John Ogden,, Gazette Printers
"Very enlightening. I don't think I will ever look at a map the same way again. " - Tracie Morrow, Youth for Human Right
"The reaction to the DVD has been great! It is an important story that needs to be told. Myths die hard and facts, when brought to light, eclipse falsity." - Carlyle Lynch, Schomburg Center for Research in Black Culture
"This short and very informative documentary looks critically at the controversial Peters projection - a map that requires you to question your worldview, if not change it. The film gives the viewer an overview of the history of the Peters projection and uses just enough biographical information about Arno Peters to inform the viewer how such a map can be inspired by such a man. In Arno Peters' own voice, the purpose and importance of the equal-area map is explained, putting a very human face to the reasons cartographers should be careful and judicious when choosing map projections." - Darin Jensen, Department of Geography, University of California, Berkeley

Please contact twn@twn.org for availability and pricing for this Title.