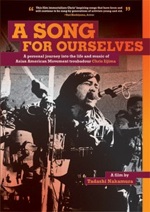 A Song for Ourselves

A SONG FOR OURSELVES is an intimate journey into the life and music of Asian American Movement troubadour Chris Iijima. Struggling to make sense of their father’s early death, Iijima's teenage sons learn that during the 1970s when Asians in America were still considered “Orientals,” Chris’ music and passion for social justice helped provide the voice and identity an entire generation had been in search of. Through animated photographs, intimate home movies, archival footage of Chris’ introduction to nationwide television by John Lennon and Chris’ own songs, their father’s life takes on bigger meaning than they had ever dreamed of.

“Art for a purpose, art for building a community” - Los Angeles Times
“Will make your heart ache.” - LA Weekly
“Wonderful - extremely well-made and powerful in its message and the history it covers.” - Oliver Wang, Scholar / Writer / DJ
“This film immortalizes Chris’ inspiring songs that have been and will continue to be sung by generations of activists young and old.” - Yuri Kochiyama, Activist
“An essential document of Asian American cultural history told movingly through the life, legacy and song of one of its driving forces, the musician-activist, Chris Iijima.” - Renee Tajima-Peña, Oscar-Nominated Filmmaker
"With A Song For Ourselves, Nakamura is no longer a "fresh up-and-coming voice" but a force to be reckoned with." - Spencer Nakasako, Emmy-award winning filmmaker
“A young filmmaker who's somehow managing to make history cool.” - Pacific Citizen
"A beautiful, poignant film that captures the life of a passionate warrior for social justice." - Dale Minami, Civil Rights Attorney
“A moving and powerful third installment of Nakamura's trilogy on the early Asian American Movement.” - Warren T. Furutani, California Assemblymember
"A thirty five minute biography of the late Chris Iijima, Asian community activist, anti-war protestor, folk singer, teacher, lawyer and devoted father. The documentary makes use of home movies, family interviews, animated photographs, archival footage, television segments, and professional video. I recommend A SONG FOR OURSELVES to both college and university libraries that have Asian or multicultural studies programs. In addition, public libraries that serve large Asian communities will also want this poignant and arresting film." - Charles Burkart, Media Bibliographer, Educational Media Reviews Online (EMRO)
"Singer-songwriter, political activist, and law professor Chris Iijima is spotlighted in Tadashi Nakamura’s documentary profile tracing the life and accomplishments of a man who helped to launch Asian American social movements in the 1960s and ’70s. Recommended." - Video Librarian Journal
"The world needs to hear about Chris Iijima. A loving tribute, A SONG FOR OURSELVES brings him and his work to our consciousness, and our consciousness needs this expanding. Suitable for high school classes and for college courses in cultural anthropology, anthropology of music, anthropology of protest and resistance, and Asian-American studies, as well as general audiences." - Jack David Eller, Anthropology Review Database