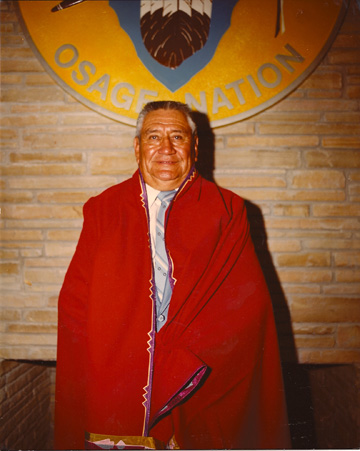 Ki-Hi-Ka Ste': Life of Chief George Tall Chief
Amy Tall Chief
2010
Color
63 minutes
US
English
Trailer and More
-  Watch Trailer
Photos
Ki-Hi-Ka Ste': Life of Chief George Tall Chief
Ki-Hi-Ka Ste' is a heartfelt story of one man's journey through life, the many lives he impacted and the legacy that he will leave behind. At age 93, George Eves Tall Chief is currently the oldest member of the Osage Nation. At age 9, he survived the murder of his father during the "Reign of Terror." This event caused him and his 4 younger brothers to be placed into boarding and military schools and were subsequently forced to sign away their land to guardians. He overcame all of these adversities and became a Teacher, Coach, Superintendent, School Board Member, Professional Rodeo Cowboy, Honoree and contributor to life and history.

George Tall Chief became one of the most poignant Chief's of modern day history, paving the way to our Osage Nation's Sovereignty. During his 8 years in office, he was one of the First Chief's inducted into the "National Native American Hall of Fame". He also received the "Peace Chief Award" and was named in "Who's Who" of Business Professionals. After his 2 terms as Chief he became President of the "First Osage National Council". The journey to our new form of government, implemented in 2006, was a long and complicated process requiring many people's contributions, including Chief George Tall Chief.

The Tall Chief family comes from a long line of pioneers who made and are still making their mark in Osage Nation and American History. To the people of the Osage Nation and others throughout the country, George Eves Tall Chief will always be affectionately referred to as "Chief" or "Coach". This is his story

"Highly Recommended. Filmmaker Amy Tall Chief made this documentary to honor her grandfather, Chief George Tall Chief, who became president of the First Osage National Council in 2006. In doing so, she presents a unique family history embedded within the tumultuous story of Oklahoma’s Osage Indian community over the course of the 20th century. George’s father was murdered during the early 1920s “Reign of Terror” that saw many Osage killed by white neighbors eager to gain access to the tribe’s oil wealth. George and his four brothers were placed in boarding and military schools and later coerced into signing away their land rights. Nonetheless, George Tall Chief grew up to enjoy a productive life as a rodeo cowboy, teacher, sports coach, and chief of the Osage Nation during its transitional period to full sovereignty. Archival photos and contemporary footage supplement the interviews with George, which form the core of this modest production. Aged 92 at the time of filming, he comes across as a remarkable raconteur who can speak about his life’s challenges with no residue of bitterness or rancor. Offering a remarkable example of perseverance in the face of extraordinary obstacles, this biographical profile is highly recommended." - P. Hall, Video Librarian