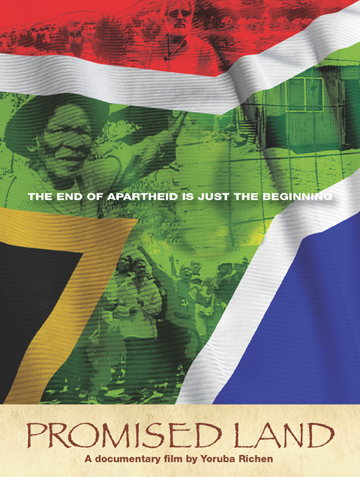 "Redistributing white-owned land is a combustible topic in South Africa. Richen succeeds in framing the issue in personal as well as historical perspectives, acknowledging that for questions of collective guilt and righting historical wrongs, there are no easy answers." - Indyweek, Durham
“Yoruba Richen’s documentary explores one of South Africa’s greatest challenges.” - New York Daily News
“An inside look at land reform and racial reconciliation in the new South Africa.” - Leonard Lopate Show, WNYC Radio, New York
“What are the statutes of limitation on justice and reparation? ‘Promised Land’ shows us there are no easy answers.” - Kevin McDonough, United Feature Syndicate
“Looks at the ticking time bomb in South Africa.” - Neal Conan, Talk of the Nation, NPR
“A compelling look at the people who will be affected on both sides.” - Roger Catlin, The Hartford Courant
“Powerful.” - Bev Smith, syndicated radio host, American Urban Radio Networks
“‘Promised Land’ explores the black, the white, and the shades of gray of post-apartheid tensions.” - Laura Flanders, GRITtv
“You’ll see fascinating, hopeful stories here.” - David Crumm, ReadTheSpirit.com
"Yoruba Richen's compelling documentary, broadcast on the PBS series POV, follows the long-running efforts of black South Africans to take advantage of post-apartheid land-redistribution programs. Sixteen years after the end of enforced segregation, the South African government is stymied in its efforts to reallocate property under a proposed "willing seller, willing buyer" policy. White South Africans' claims stretch back deep into a time when the legal system ignores blacks' rights, and as a result, many are unwilling to sell holdings that have been in their families for generations, while blacks lack the legal documentation to support claims that they are trying to regain what was stolen from them. Richen presents a mature and balanced consideration of two specific cases out of the 22,000 beign actively processed. One involves a rare government seizure of 3,800 acres of white-owned property following legal presure brought by 1,000 descendant of Abram Molamu, a black South African whose family was forced to sell his land by the white-run government in 1940. Recommended." - Video Librarian Journal
"Yoruba Richen began filming PROMISED LAND in 2004 and, thus, has captured longitudinally the (lack of) progress in land reform. The film will appeal to and educate high school, college, and general audiences. With tolerance and compassion, it focuses on the individual faces behind South Africa’s prolonged striving to become a moral society." - David McDermott Hughes, Transition Magazine