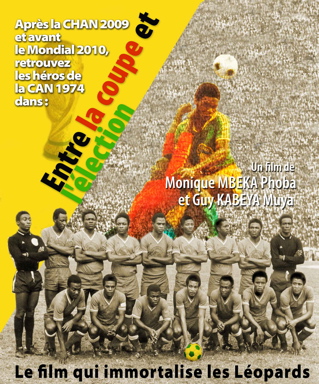 Between the Cup and the Election
Monique Mbeka Phoba & Guy Kabeya Muya
2008
Color/BW
56 minutes
DRC/Belgium
French
English subtitles
Trailer and More
-  Filmmaker Monique Phoba Talks about Her New Film and Career
-  Watch Trailer
-  Watch 2011 New Releases Trailer
Photos
Press Packet
Between the Cup and the Election
Inspired by the 2006 elections in the Democratic Republic of the Congo, formery Zaire, a group of film students sets out to make a film. With the help of veteran filmmakers Monique Mbeka Phoba and Guy Kabeya Muya, the young students track down members of the 1974 Leopards, Zaire's national soccer squad, the first team from sub-Saharan Africa to qualify for the World Cup. After a dismal first round performance -- the Leopards were outscored 14-0 in three games -- the players returned home in disgrace and drifted into obscurity. The team's captain, however, has fared better and is running for political office in Kinshasa. Deftly weaving past and present, BETWEEN THE CUP AND THE ELECTION offers a personal and endearing study of the intersection between sport and politics.

"BETWEEN THE CUP AND THE ELECTION offers as much insight into Congolese political culture as it does into Congolese soccer...filled with terrific archival footage of the 1974 World Cup, of Mobutu-era Zaire, and of the Leopards, the team that was, at the time, the pride of Africa. The larger story of the players’ collective vanishing act from Congolese society after they crashed out of the World Cup is a sad but important demonstration of the fleeting nature of celebrity, no matter the trade or the country in which that fame was won." - Austin Merrill, Vanity Fair
"The screen is filled with the bright colors of indigence: brilliant hand-me-down T-shirts, lustrous trash-filled streets, and energetic kids hoping to become soccer stars themselves. Hope is the message." - Culture Catch
"Features a group of enterprising Congolese student filmmakers seeking the story of their countrymen who, in 1974, went to Germany as the first black African team to compete. While learning their own history of their country, then known as Zaire, they track down former members of the Leopards to get very personal insights into the political and propaganda issues of sport." - Nora Lee Mandel, Film-Forward.com
"A lively and compelling narrative showcasing Congolese culture, questions about what societal debt is owed to fading sports legends and the role of racism in international sports competitions. Recommended for libraries collecting in the areas of Congolese or sports history." - Jessica Schomberg, Educational Media Reviews Online (EMRO)