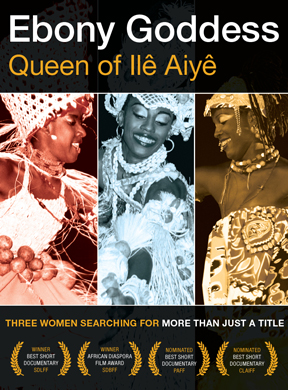 For Aurelina, Joseane and Talita, the competition for the title of Ebony Goddess is part of a profound and personal search for identity and self-esteem. The figure of the Ebony Goddess, representing a “black is beautiful” view of black women, resonates with women of African descent in Brazil, the United States and throughout the world of the African Diaspora.

For Aurelina the contest has become an obsession. She has competed in the past four years, but never won the contest, although once she placed third. Every year she feels an irresistible need to try again. She says she already feels like a queen, and just needs the title itself.

Talita is taking dance classes, and wants to becomea professional dancer. She earns a living by tutoring kids in the community, and offers free help to kids who cannot afford to pay.

Joseane has recently become involved in the African dance styles of Ilê Aiyê, and counts on the support of her family and friends as she prepares for the competition. Her father has participated in Ilê Aiyê since its early years, when the group was harassed by the police and accused by the media of being racist for having an all-black membership.

Following the three candidates’ daily lives, dance rehearsals, and interactions with each other, Ebony Goddess: Queen of Ilê Aiyê shows the contest’s role in reshaping the idea of beauty in a society in which African descendants constitute the majority of the population but is pervaded by Euro-centric concepts of body esthetics. The concept of the Ebony Goddess creates an alternative view of the black female body as beautiful, desirable, and talented, promoting social change at its most basic level: the individual sense of self.

"Through her delicate and respectful eyes, Carolina Moraes-Liu leads the spectator through the heart of Curuzu, an Afro-Bahian neighborhood where the Black Carnaval group Ilê-Ayê is preparing the choice of its Black queen. The documentary brilliantly presents Bahian Carnaval as a central arena for the promotion of cultural assertion of Afro-Brazilian populations, and a privileged space where Afro-Brazilian women are fighting against racism and developing self-esteem." - Ana Lucia Araujo, Assistant Professor of History, Howard University
"EBONY GODDESS penetrates the intimacy of Afro-Brazilian women in search of their own expression of beauty. It is a film that help us comprehend the mechanisms of a society that praised miscegenation at the same time that it repressed differential singularities. By dancing, these women became goddesses of their own liberty in the neighborhood of Curuzu, in Bahia, Brazil. I highly recommend this film for Latin American, Brazilian, African Studies, as well as for Film, Drama, Performance Studies, and International Relations." - Marília Librandi Rocha, Assistant Professor of Iberian and Latin American Cultures, Stanford University
"What happens when young women are inundated with the model of Eurocentric beauty, tall, slender, and light eyes? How do women redefine what it means to be beautiful? That is just what filmmaker Carolina Moraes-Liu tackles in her film "Ebony Goddess: Queen of Ilê Aiyê". Based in Salvador da Bahia, Brazil, "Ebony Goddess: Queen of Ilê Aiyê" follows three young women in their dream to earn the title as Queen of Ilê Aiyê. More than just a pageant, Moraes-Liu encapsulates the importance of being Queen of Ilê Aiyê and how it serves as the ultimate platform for promoting African beauty in Brazil. On their quest to achieve the title, Moraes-Liu takes the audience on a journey into the lives and struggles of African women as they combat the standard depiction of beauty and gain self-esteem and self-value through the process. Moraes-Liu penetrates through the surface of aesthetics and highlights the political and social struggles of African women in a delightful and charming way." - Ashmar Mandou, Lawndale Bilingual Newspapers
"Carolina Moraes-Liu presents an amazing film that captures the spirit of young black women committed to their community and to celebrating their identity as black women. Ilê Aiyê redefines the standards of beauty for these women, raising self esteem and instilling a sense of pride in their African heritage." - Gisèle-Audrey Mills, Ph.D. candidate in Ethnomusicology at University of Maryland
"Wonderfully engaging film, with beautiful and amazing images! Ilê Aiyê represents one of the most authentic movements towards the preservation of the so called Jeje-Nagô tradition under the form of a cultural carnival group in Salvador, Bahia. The documentary "Ebony Goddess: Queen of Ilê Aiyê" twists the coin of segregation and low self-esteem associated with black women in post-slavery Salvador city, putting up instead the face of pride, conscience and joy that play the main role in the rich lives led by these African queens and princesses. The film somehow manages to transport the viewer into the point of view of the subjects, and can serve as a great tool for African American, Latin American, Cultural Anthropology and Women Studies courses dealing with racism, religion, performance, and gender." - Adelson de Brito, Professor at the Federal University of Bahia (UFBA)
"Recommended. Provides an entry point to discuss cultural standards of beauty, public portrayals of women, and cultural celebrations." - Kathleen Spring, Linfield College, Educational Media Reviews Online (EMRO)
"Designed to boost self-esteem and build cultural pride, the competition is meant to inspire Afro-Brazilian women to overcome social and racial discrimination. EBONY GOODDESS touches on issues germane to both black culture and women's studies, making this a strong optional purchase." - M. Puffer-Rothenberg, Video Librarian
"EBONY GODDESS is a pleasure to watch, and it also opens up many discussions relevant to women’s and gender studies classes. As a critical practice, it is worth considering how the pageant may symbolize, if not also act as a form of, Black resistance to Euro-hegemonic norms, which are reinforced through the unequal exchange of beauty supplies and other commodities in the global marketplace..." - Mignonette Chiu, Films for the Feminist Classroom