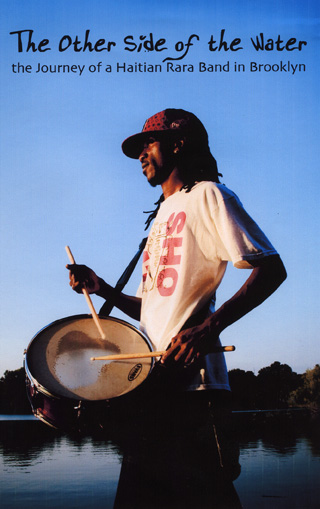 Rara originally served as a voice of the slaves in their revolt against the French, and as the voice of those struggling against ongoing dictatorships in Haiti. This documentary follows the journey of DJARARA – the only sustained rara band in America – through a hidden New York landscape of vodou temples, underground economies, violent politics, and ground-shaking music.

Combining archival footage and vérité narratives, this documentary focuses on the journey of the poetic visionary Pé Yves. Yves has led a Rara movement in New York since the late ‘80’s, through an era when the media accusing Haitians of bringing AIDS to America, to times of civil chaos in Haiti, to police brutality riots in New York – each time re-imagining Rara as a voice for an evolving Diaspora. Yet when a new generation arrives bringing a radically different vision of the music, and the Haitian Christian community attacks Yves for promoting a Vodou ritual, he’s caught in the middle of a struggle for the meaning of Haitian identity.

Ultimately, THE OTHER SIDE OF THE WATER is about the struggle to merge the traditional and the modern; the island and the City; the imagined and the real. The documentary tells the story of one man who learns to hold true to a vision; a motley band that comes to speak for a larger community; and a music that manages to create a new meaning of home in the Diaspora.

“The film offers an essential, re-affirming perspective of Haitian imagery and culture that desperately needs to be seen." - Michelle Materre, The New School
"This film is an insight into all the major events in the Haitian-American Community in the last 20 years, through the lens of one of Haiti's deepest roots-music traditions." - Pascal Antoine, HaitiXchange.com
"This fascinating documentary allows us a glimpse into a new setting for this old event (which is thought to date back to the Colonial era), the Haitian community in Brooklyn, NY. Many manifestations of Haitian culture (such as konpa music) survive in the US, even though hardly anyone outside the Haitian-American community is aware of their existence… The film follows the band’s history from its formation in the early 1990’s to the present, through a series of interviews with Pe Yves, as well as present and former members of the band, family members, supporters and detractors. There are also rehearsal and performance footage, short video clips of Haitian bands, radio appearances in which Pe Yves openly discusses the negative stereotypes people have of the music, and expert opinion on both cultural and Haitian political matters." - Tom Bingham, SUNY Fredonia, GenEc DVD Review
"THE OTHER SIDE OF THE WATER: THE JOURNEY OF A HAITIAN RARA BAND IN BROOKYLN documents the lives of Haitian immigrants living in New York City (primarily Brooklyn), a band of Haitian American musicians called DJA-Rara, and the music they are devoted to, rara. This documentary is essential for any university library supporting an ethnomusicology program or African American studies, but also belongs in any public library serving a Haitian American community. Highly Recommended." - Vincent J. Novara, Educational Media Reviews Online
"THE OTHER SIDE OF THE WATER provides profound insight into all the major events in the Haitian-American community in the last twenty years, through the lens of one of Haiti’s deepest roots-music traditions. It will find its place as part of a growing archive on the Haitian diaspora in the United States. Anyone interested in Haitian diasporan musics will benefit from viewing this documentary. Haitian audiences in particular, both in Haiti and the United States, should find this film thought-provoking, and stimulating, and socially and historically relevant." - Emmanuel Pereira, Ethnomusicology Journal