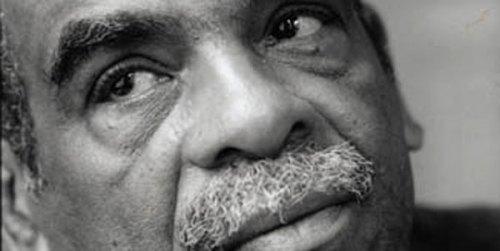 Edouard Glissant: One World in Relation
Manthia Diawara
2010
Color
50 minutes
US
French
English
Trailer and More
-  Watch Trailer
Photos
Edouard Glissant: One World in Relation
In 2009, filmmaker Manthia Diawara, along with his camera, documented his conversations with Martinican philosopher, writer, and poet Édouard Glissant aboard the Queen Mary II on their transatlantic journey from Southampton, England to New York City. This intellectual voyage encapsulates Glissant’s life’s work and studies on his theory of Relation and the concept of Tout-monde, amongst several other of his philosophical suppositions.

“Every diaspora is the passage from unity to multiplicity.” Glissant believes that, “[people are] in a stage of perpetual change… You can change, you can be without the Other, you can exchange with the Other while being yourself…” That is, for him, understanding and tracing genealogical roots as far back as one can is of less importance than understanding and discovering the bonds that unite all of humankind as one. Glissant asserts that people’s physical, cultural, and geographical differences should not separate and divide them, rather those “essential qualities” should be the factors that link the world together. The ability to accept and become accustomed to each other’s “essential qualities,” without having to alter our own, in order to create a more mutual and integrated world is at the forefront of this documentary.

Glissant is widely considered to be one of the most influential Caribbean thinkers and cultural commentators. Typically known for his written works, One World in Relation offers a more first-hand and accessible view into Glissant’s thoughts and beliefs on his own theories, as well as the topics of creolization, Rhizome, nation borders, and opacity. Produced only two years before his death, this documentary perhaps serves as a final summation of Glissant’s lauded work in the field of philosophy, and will prove to be especially useful for any student of philosophy, Caribbean or European studies.

"Profound and inspiring… The director remains completely unassuming, maintaining the focus on Glissant’s words, gestures, and silences. This standpoint, coupled by views of the wide seas that unite us, constitute the full hearted charm of the film." - Ivette Romero, Repeating Islands