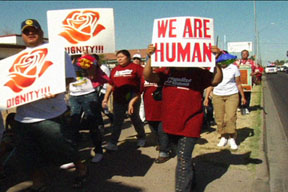 Arizona : Resisting SB 1070 Immigration Law
Producer: NDLON, NDWA & Puente Movement
2011
Color
60 minutes
US
English/Spanish
English subtitles
Trailer and More
-  Watch Clip
Arizona : Resisting SB 1070 Immigration Law
These four videos document the impact of SB 1070 and other immigration policies on the lives of immigrant families in Arizona, and the growing national efforts to end these violations of human and civil rights. SB 1070, signed into law by Arizona Governor Brewer in April 2010, made it a crime not to carry documentation at all times – and gave local police broad powers to detain anyone they suspected of possibly being undocumented. The videos show the chilling terror that has kept families prisoners in their own homes, and children in fear of losing their parents to surprise detainment and deportations. Women and children have been particularly affected by this law, but have also been in the forefront of fighting for their human and civil rights, and young people have become some of the strongest spokespersons for this resistance movement. These videos were projects of the National Day Laborer Organizing Network and the National Domestic Workers Alliance in partnership with the Puente Movement.

SHORT I: ARIZONA WOMEN AND CHILDREN RISE (18 min) In May 2010, a delegation of women leaders, including members of the National Domestic Workers Alliance, went to Arizona to bear witness to the human rights abuses against women and children in the wake of the anti-immigrant law SB1070.

SHORT II: WOMEN AND CHILDREN'S ADVOCACY DAY (9 min) A combination of clips from the Women and Children’s Advocacy Day press conference and hearing that took place on July 15, 2010 in Washington D.C. Included is the voice of Puente Arizona, the National Domestic Workers Alliance, the personal accounts of two young activists whose lives have directly been affected by the anti-immigration law SB1070. A young mother shares her impacting story and speaks out against the emphasized stress on women and children: “I’m a hard-working mother here to support my family. I’m really afraid of being deported and I don’t want to leave my daughter here without a mother.”

SHORT III: WOMEN AND CHILDREN'S ADVOCACY DAY PRESS CONFERENCE (11 min) Clips from the Women and Children’s Advocacy Day press conference, featuring representatives from the National Domestic Workers Alliance, Puente Arizona, and young activists who have directly been affected by the anti-immigration law SB1070. Heidi Portugal, age 12, addresses the audience and says, “So I ask all of you guys, please, to pass the word and not let SB1070 pass as a law because it is just hateful and separates lots of families.”

SHORT IV: WOMEN AND CHILDREN'S ADVOCACY DAY HEARING (22 min) Clips from the Women and Children’s Advocacy Day hearing, featuring young activists and state representatives, all addressing the consequences of detaining and deporting parents, and, the lasting effects they have on the children left behind. Carola Suarez-Orozco, a professor of applied psychology at NYU, reports, “currently 16 million children have at least one parent that is an immigrant. The majority of these youths are U.S. citizens.”