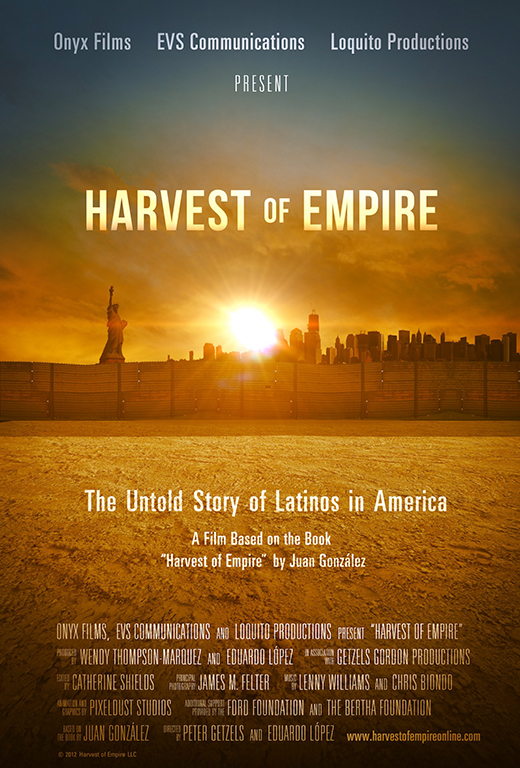 Harvest of Empire: The Untold Story of Latinos in America

At a time of heated and divisive debate over immigration, HARVEST OF EMPIRE examines the direct connection between the long history of U.S. intervention in Latin America and the immigration crisis we face today.

Based on the groundbreaking book by award-winning journalist Juan González, HARVEST OF EMPIRE takes an unflinching look at the role that U.S. economic and military interests played in triggering an unprecedented wave of migration that is transforming our nation’s cultural and economic landscape.

From the wars for territorial expansion that gave the U.S. control of Puerto Rico, Cuba and more than half of Mexico, to the covert operations that imposed oppressive military regimes in the Dominican Republic, Guatemala, Nicaragua and El Salvador, Harvest of Empire unveils a moving human story that is largely unknown to the great majority of citizens in the U.S. “They never teach us in school that the huge Latino presence here is a direct result of our own government’s actions in Mexico, the Caribbean and Central America over many decades -- actions that forced millions from that region to leave their homeland and journey north,” says Juan González at the beginning of the film.

HARVEST OF EMPIRE is the winner of the ABCNews Sourcevideo Award for the best use of news footage as an integral component in a documentary.
The Higher Education Institution DVD is intended for use by the acquiring educational institution only. With the purchase of this DVD, Higher Education Institutions are licensed to show this DVD in classrooms and libraries. In addition, acquiring educational institutions may host non-profit, on-campus screenings to staff, faculty and registered students only.

The K-12 & Public Library DVD is intended for use by the acquiring school or public library only. Public screenings are not allowed.

Producer Wendy Thompson-Marquez's article on her own immigration experience:
http://www.huffingtonpost.com/wendy-thompsonmarquez/harvest-empire_b_1581948.html

"Harvest of Empire is a breakthrough documentary in the way it connects the historical interaction between the US and Latin America with the immigration debate. Using rarely seen newsreel footage and interviews with prominent migrants from countries in the Caribbean, Mexico, and Central America, the film puts a human face on an issue too often reduced to vulgar stereotyping. It has the effect of changing the discourse from one of "illegality" to "historical truth." - Ed Morales, Univision News & Columbia University
"I hope that "Harvest of Empire" gets a billion viewers, that it wins an Academy Award or an Emmy and that its producers and author strut at Cannes on a red carpet, if only as an expression that there's a reward for telling the truth, doing good and getting an overdue conversation going between neighbors." - Jose de la Isla, syndicated columnist
"With the immigration debate currently consuming much of the current political climate, there's no better time for the release of Harvest of Empire." - Frank Scheck, Hollywood Reporter
"Harvest of Empire has a journalistic pedigree and a punch that comes from political advocacy...The filmmakers retain a touching faith that most Americans won't tolerate injustice when they know about it. This film is meant to teach them." - Rachel Saltz, New York Times
"In an era of anti-immigrant fervor, this sobering and much-needed look at Latino migration is built on an undeniably optimistic premise: that once Americans have accurate facts, 'they rarely allow injustices to stand." - Elizabeth Weitzman, New York Daily News
"Directors Peter Getzels and Eduardo Lopez wisely strip their argument of passion, and pile on history and facts to highlight the U.S. role in the surge of immigrants crossing the border in the past century... a refreshing approach in this age of punditry and choir-preaching." - Peter Hartlaub, The San Francisco Chronicle
"The recent reemergence of immgration as a pressing matter in U.S. politics… makes HARVEST OF EMPIRE a especially timely documentary. Based on the same-titled book by Juan González… Getzels and López's intelligent film should broaden the discussion… Recommended." - Video Librarian
"With immigration a central issue in the news, this is an essential film for everyone." - Deborah Menkart, Good.is
"The film broadens the frame to examine Latin American migration to the United States in the wider context of an interconnected history of the Americas… Each segment is made fresh through riveting archival footage and personal stories." - Matthew Scalena, The Americas: A Quarterly Review of Latin American History
"I urge everyone who wants to understand how we got here to watch the powerful 2012 documentary “Harvest of Empire” (based on Juan González’s book of the same name), so that we can collectively remember the direct correlation between the United States’ interventions in Latin America and the injustices in our immigration system today. They are here because we were there." - Teresita Fernández, Visual Artist