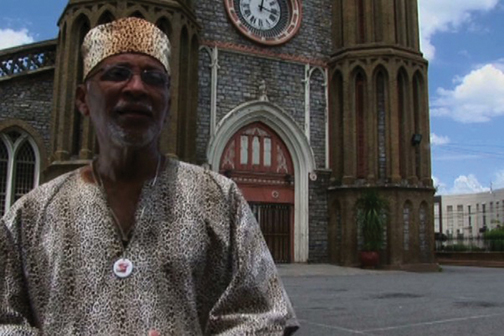 ‘70: Remembering a Revolution
Alex DeVerteuil & Elizabeth Topp
2011
Color
114 minutes
Trinidad & Tobago
English
Trailer and More
-  Watch Trailer
‘70: Remembering a Revolution
How did a handful of students change the course of history in Trinidad and Tobago? Between February and April 1970, the streets of Port of Spain were filled with young Black men and women chanting ‘Power to the People’, fists raised in a salute learned from the U.S. Black Panthers. This was the legendary Black Power revolution in Trinidad and Tobago, which captivated the imaginations of their youthful followers and made the government of Dr. Eric Williams and the white establishment very nervous indeed. The revolution was ended by a State of Emergency, but this in turn was threatened by a surprise mutiny among the soldiers of the Regiment. Had it succeeded, a military coup might well have ushered in a socialist revolutionary government to Trinidad and Tobago.

Forty years later, the impact of the Black Power revolution remains fresh and strong in the culture of Trinidad & Tobago. Film director Alex DeVerteuil interviewed the revolutionaries themselves, and journalists observing from the sidelines; the daughter and a close confidante of the Prime Minister, and senior members of the white business community; Coast Guard officers and Army mutineers. Their memories and anecdotes, by turns moving and hilarious, surprising and shocking, are supported by newly-unearthed archival film footage and photographs.
This film is part of the CaribbeanTales Worldwide Distribution catalog. Estimated delivery time for DVD purchases is 6-8 weeks. For5-years Digital File streaming licenses, please fill out this form: https://forms.gle/nJCMubvys47ahvwh6