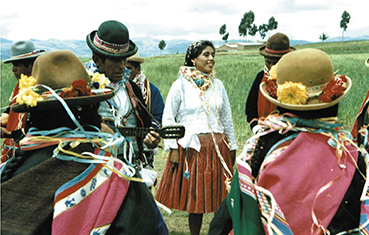 Loving Each Other in the Shadows
Marcelina Cárdenas
Producer: CEFREC/CAIB
2001
Color
47 minutes
Bolivia
Quechua
English subtitles
Photos
Loving Each Other in the Shadows
Llanthupi Munakuy/Quererse en las Sombras
Rosita, from a privileged background, and Juancito, from a poor family, fall in love during Carnival time, a time for everyone in their community, rich and poor, to get together, dance and drink the traditional chicha. But Rosita’s marriage has been arranged by her parents and her love for Juancito is strictly forbidden. Based on the oral tradition of the K’ochas community in Potosí, this is the first CEFREC/CAIB fiction film written and directed by a woman filmmaker.


TWN is proud to release the work of the Bolivian indigenous media collective CEFREC/CAIB. Since 1996, CAIB (Bolivian Indigenous Peoples’ Audiovisual Council) and CEFREC (Cinematography Education and Production Center) have been at the forefront of indigenous cinema in Latin America, producing a vast catalog of documentaries, docudramas and fiction films for local indigenous communities. Although the work of CEFREC/CAIB has been featured in numerous international film festivals outside Bolivia, this unique collection has not been available for purchase outside the local Bolivian market until now.

"A village divided against itself sets the stage for a star-crossed love affair. This compelling fiction, one of the first from the Andes written and directed by a woman, is based on the oral tradition of the filmmaker's community, CK'ochas." - Nativenetworks.com
“Video becomes a crucial technology for the reinvention of indigenous cultures, directed against the effects of the long-standing discrimination of indigenous people, languages, medicinal practices, as well as their social and economic relations.” - Freya Schiwy, Decolonizing the Frame: Indigenous Video in the Andes