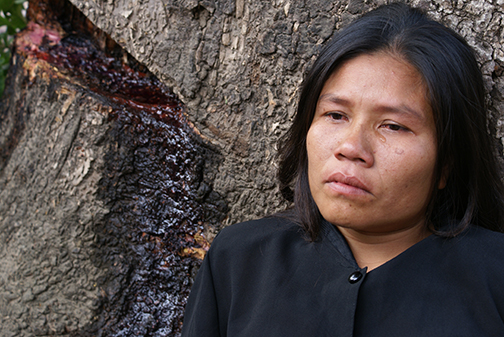 Cry of the Forest, The
Alejandro Noza, Nicolás Ipamo, Iván Sanjinés
Producer: CEFREC/CAIB
2008
Color
94 minutes
Bolivia
Spanish
English subtitles
Photos
Cry of the Forest, The
El Grito de la Selva
Bolivia’s first indigenous feature film, THE CRY OF THE FOREST is based on true events that led to the indigenous demonstrations of 1990 and 1996, two events that changed the political history of Bolivia forever.

TWN is proud to release the work of the Bolivian indigenous media collective CEFREC/CAIB. Since 1996, CAIB (Bolivian Indigenous Peoples’ Audiovisual Council) and CEFREC (Cinematography Education and Production Center), have been at the forefront of indigenous cinema in Latin America, producing a vast catalog of documentaries, docudramas and fiction films for local indigenous communities. Although the work of CEFREC/CAIB has been featured in numerous international film festivals outside Bolivia, this unique collection has not been available for purchase outside the local Bolivian market until now.

"The regional indigenous movement of the 1990s in Bolivia sets the stage for the country’s first indigenous feature film. Communities in lowland Beni are shattered by violence meted out by illegal loggers. Their defense of their lives and lands culminates in protests that change the political landscape of Bolivia forever." - Nativenetworks.com
"It is the mid-nineties and an era of change for the Indigenous people of Bolivia… Described as Bolivia's first Indigenous feature film, this groundbreaking film is an intimate portrait of village life, a people's on-going struggle against corruption and a vivid recollection of a tumultuous time in Boilivia's history." - imagineNATIVE Film and Media Arts Festival
“Video becomes a crucial technology for the reinvention of indigenous cultures, directed against the effects of the long-standing discrimination of indigenous people, languages, medicinal practices, as well as their social and economic relations.” - Freya Schiwy, Decolonizing the Frame: Indigenous Video in the Andes