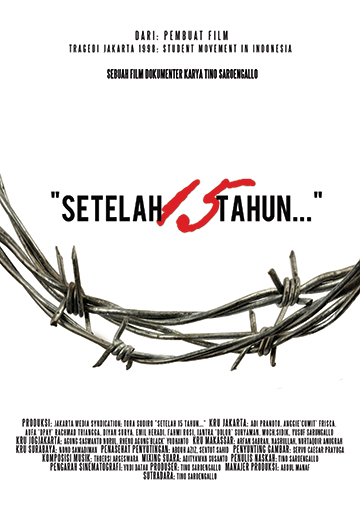 To mark the 15th anniversary of the 1998 student movement and the beginning of the Reformasi era that followed the fall of Suharto, Indonesian independent filmmaker Tino Saroengallo interviews former leaders of the student movement to ask the controversial question: did the movement fail to bring democratic change in Indonesia?

Now in their thirties, the former student activists have a lot to say. The movement's indisputable contribution to Indonesia's modern history was the end of Suharto's dictatorship, but what followed left many in the student movement feeling unprepared. In retrospect, one of the leader says, "we were ready for him to step down... but Suharto beat us to it, he resigned sooner than we thought he would."

Indonesia's Reformasi brought freedom of speech, freedom of expression, and democratic elections, yet Suharto's resignation was followed by the immediate appointment of his own vice president, B.J. Habibie, as the new President, and the quick reorganization of the political elite in new positions of power. "The students were ready for Suharto's downfall, they wanted that, but they had no clue what they would have to do in the aftermath," says a university professor.

With present day interviews and archival footage, Tino Saroengallo's STUDENT MOVEMENT IN INDONESIA: 15 YEARS LATER offers a thoughtful and sobering look at Indonesia's post-dictatorship era, and a much needed follow up to his documentary THE ARMY FORCED THEM TO BE VIOLENT, a visual record of the 1998 student demonstrations, the army's violent response, and the shocking moment when the students fought back.