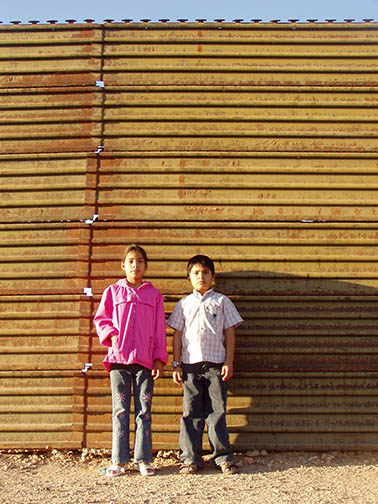 Siblings Abi and Eliezer, two Mexican minors living in a migrant shelter in the border town of Agua Pietra, Mexico, await their chance to cross the border to reunite with their mother Maria who lives in Tucson, Arizona. On the other side, Maria makes arrangements with a "coyota", or female smuggler, to bring the kids for a fee of $1,500 per person.

Shot in the aftermath of the Secure Fence Act of 2006 -- which aimed to decrease the number of undocumented immigrants crossing to U.S. territory by building fences along the most common entry points of the U.S.-Mexico border -- LITTLE IMMIGRANTS features interviews with immigration activist and experts including members of pro-immigrant group No More Deaths and anti-immigrant group Minute Men Project; agents of the U.S. Border Patrol and the Mexican State Department Grupo Beta; Arizona's Attorney General Paul Charlton and Arizona's Superintendent of Public Instruction Tom Horne; an exclusive interview with late Senator Edward Kennedy; and many more.

"This compelling story offers a unique view of the immigration politics and how it affects children's lives." - New Orleans Film Society
"Sonia Fritz's films consistently show passion and concern for her subjects, and the results can be both educational and emotional. She focuses on women and men artists, musicians, or activists who had their day in the sun but who have since been neglected. Given her own history of having migrated from Mexico to Puerto Rico, she identifies with many of the migrant women she films and with the children who also need to migrate to be with family and begin a new life. The films make it possible for these individuals to be studied, understood, and remembered. Her longtime interests in children, women, and immigration are especially timely today." - Eva Santos-Phillips, Cineaste
"Recommended… An excellent look at a timely topic. This film would be an excellent presentation in college classes, especially sociology. Teachers of advanced high school classes may also want to consider for discussions on multicultural or controversial issues. Public libraries may want to purchase for their DVD collection, as this film would appeal to many." - Mary Northrup, EMRO
"LITTLE IMMIGRANTS provides evidence of the hardening of borders as political capital in the ascension of a right-wing cultural hegemony in sync with the economic needs of an American neoliberal economy. It focuses on minors (under 18 years of age) left behind in Mexico and whose parents moved and “settled” in the United States without papers and laboring in low-wage jobs. LITTLE IMMIGRANTS offers a poignant portrayal of how the US-Mexico border affects Mexican families." - Luis L. M. Aguiar, Films for the Feminist Classroom