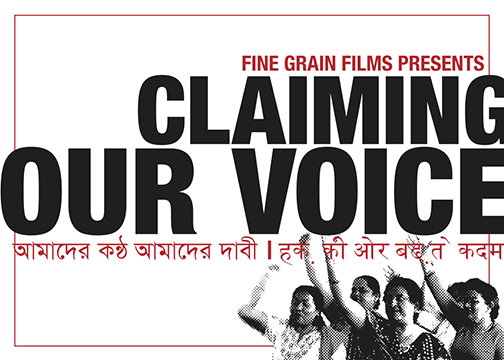 There are 1.8 million domestic workers in the United States. Of these domestic workers 99% are foreign born, and 93% are women. CLAIMING OUR VOICE helps raise awareness and foster discussion about the hidden issues of domestic work and immigration both within and outside of the South Asian community. Through the course of the film, our main characters are revealed as their own heroines - challenging stereotypical images of immigrants and low-wage workers as well as notions of culture, race, gender, and class.

CLAIMING OUR VOICE is available for educational purchase on DVD and Digital File combo. The DVD includes the full performance of the theater piece created by Andolan, "Sukh aur Dukh ki Kahani (Stories of Joy and Sorrow)". To facilitate discussion in community screenings and classrooms, a screening guide and companion curriculum is included with the purchase of the film. Written and developed by Promiti Islam, M.A. and Dr. Monisha Bajaj, Ed.D.in consultation with Chitra Aiyar, Karishma Desai and Jennifer Samuel, this resource packet includes a four-lesson unit for high school level students on understanding the power of narrative and voice for immigrant domestic workers.

"This film follows Andolan members as they seek self-expression beyond the simple survivor narrative. They reconstruct their stories as individuals and as a collective, with a pastiche of dialogue, song and dance, merging folk traditions with contemporary politics and radical performance art." - Michelle Chen, The Nation
"Suitable for high school classes and college courses in cultural anthropology, anthropology of labor, anthropology of migration, anthropology of women, multiculturalism, and South Asian and American studies." - Anthropology Reviews Database
"...Examines how a number of women... overcame their negative experiences of being exploited and how they united within a community group known as Andolan. Recommended." - Educational Media Reviews Online, EMRO
"Filmmaker Jennifer Pritheeva Samuel's documentary short follows Andolan, an NYC-based group of South Asian women, as they create, rehearse, and present a theatrical production, Stories of Joy and Sorrow, centering on the exploitation and violence suffered by immigrant domestic workers. Led by Sri Lankan-American performance artist YaliniDream, the women assemble an evening of storytelling, singing, and dance designed to raise awareness and ultimately improve working and living conditions for domestics, whose employment in private home is unregulated. This lack of legal protections enables employers to easily blur the distinction between work and private life, requiring domestics to be on the job constantly—in some cases with no time off—and accept low wages (other exploitative conditions include a lack of privacy and restrictions on movements outside the home). The members of Andolan decide to focus their presentation on life in Bangladesh (their home country), emigration to the United States, and experiences in personally overcoming poverty and abuse. Two members are interviewed about Andolan's impact on their lives, noting that they no longer feel merely like victims telling their stories to journalists or attorneys, but rather have learned that speaking out can result in change. Presented without narration, CLAIMING OUR VOICE brings their message to a much wider audience. Recommended." - M. Puffer-Rothenberg, Video Librarian Magazine