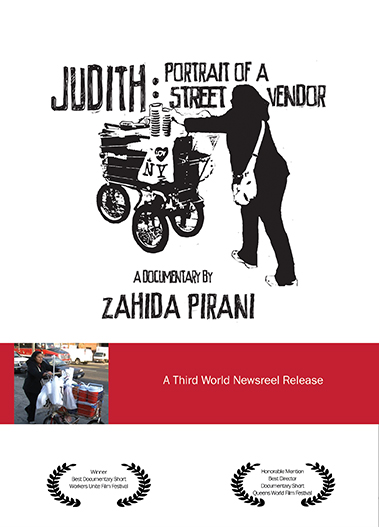 Judith: Portrait of a Street Vendor

JUDITH: PORTRAIT OF A STREET VENDOR is a documentary short that takes the audience on an intimate journey into the daily life of Judith, a street vendor from Guatemala who lives and works in New York City. Judith exposes the routine obstacles and struggles she and her fellow immigrant vendors face daily on the city’s streets and reveals her own hopes and aspirations as an immigrant worker, mother, activist and community organizer.

“An engaging, powerful film about the lives of immigrant women that is the perfect entry point for discussing larger social issues. It produced brilliant poems from my middle school students.” - Ellen Hagan, Poetry Chair, DreamYard Project
"This excellent film delivers a compelling story about the plight of immigrant workers and their families. It is a valuable educational resource in any setting, and especially for students and practitioners whose interests and work are at the intersection of labor rights and economic inequality. When we showed it at the Cornell Worker Institute, our students were both moved and inspired to further their knowledge and experience in matters related to social justice." - Maria Figueroa, Director of Labor and Policy Research, ILR School, Cornell University
“I screened JUDITH: PORTRAIT OF A STREET VENDOR in a creative nonfiction class that centered on writing about community. It was a powerful text for students to learn from in terms of its aesthetics in ethically portraying a subject. Because Judith is shown advocating for herself and other immigrant workers, the film powerfully inspired my students to write their own observations and beliefs while helping them to understand more deeply the responsibility inherent in telling the stories of others.” - Nancy Agabian, CUNY Queens College and NYU Gallatin School of Individualized Study
"JUDITH: PORTRAIT OF A STREET VENDOR is a powerful tale of the struggle of millions of immigrant workers in the United States who are here to work hard to give a better life to their families. Judith's story is also an example as to how they can lift up their voices and bring change through organizing." - Gonzalo Mercado, National Day Laborer Organizing Network & El Centro del Inmigrante
"A short but effective film depicts a Guatemalan woman in the US who prepares food for sale on the street, while organizing other vendors to demand social justice and immigration reform. Suitable for high school classes and college courses in cultural anthropology, anthropology of food, anthropology of migration, and Latin American and U.S. studies, as well as for general audiences." - Jack David Eller, Anthropology Review Database (ARD)
"Recommended. Judith sells on the streets, where she often endures physical and emotional threats from police and other vendors. When she’s not food vending, she works to unionize other immigrant street vendors as part of VAMOS Unidos and stages protests. Judith is easy to root for." - Sara Parme, Educational Media Reviews Online (EMRO)