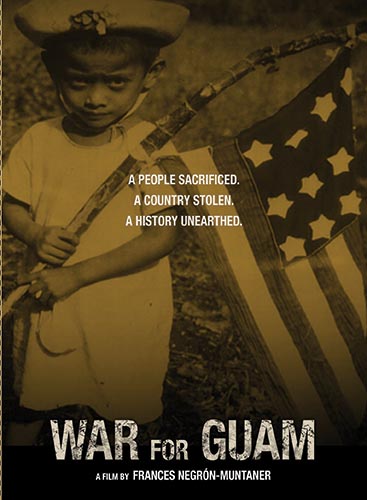 War for Guam
Frances Negrón-Muntaner
Producer: Frances Negrón-Muntaner, Baltazar B. Aguon, Michael Lujan Bevacqua, Cristine Borja Sumbi, Beni Matías
2015
Color
57 minutes
US
English
Trailer and More
-  Watch Trailer
-  Listen Radio Interview with Frances Negrón-Muntaner
Photos
Press Packet
War for Guam
WAR FOR GUAM is a 57-minute film about World War II and its enduring legacy in Guam, a U.S. territory since 1898. The film tells the extraordinary story of how the Native people of Guam, the Chamorros, remained loyal to the US under a brutal Japanese occupation. Through rare archival footage, contemporary veritè, creative use of graphics and sound as well as testimonies of survivors and their descendants, the program is told from various points of view. These include war survivors like Antonio Artero, Jr., whose father was awarded one of the first Medals of Freedom for his heroic deeds when protecting American lives; and two key historical figures, Radioman George Tweed and Father Jesus Baza Duenas.

When the war began in Guam on December 7, 1941, Father Duenas was a thirty-year old Chamorro priest who immediately decided to stand up for Chamorros by openly defying the Japanese authorities attempts to change their religious beliefs, cultural traditions, and political loyalty to the United States. George Tweed was a 39-year-old American Radioman who had decided to flee into the jungle rather than be sent to a prisoner of war camp in Japan. Although unarmed and under constant surveillance for any signs of disaffection, the Chamorros decided to protect Tweed, often facing torture and death so that he could avoid capture. The stories of Chamorro families, George Tweed and Father Duenas dramatically intertwined when after nearly three years of occupation, Father Duenas, alongside two other Chamorro men, were executed for refusing to give information on the soldier’s whereabouts. Hours later, the US military rescued Tweed before beginning the takeover of Guam.

The Chamorros, who had been interned in a concentration camp with some having witnessed a series of massacres, welcome the US soldiers as saviors from death. Yet, immediately after Guam’s liberation on July 21, 1944, the US proceeded to confiscate three quarters of Guam’s land mass for military and recreational purposes. Chamorros responded with a drive for the people of Guam to become US citizens, believing that such status would protect them from the land takings. Six years later, Chamorros became US citizens but there was no significant devolution of land. Instead, Guam was quickly ushered into a market economy where most activity revolved around military contracts and military service.

Marginally employed or working for the military, Chamorros initially found it difficult to seek justice. But as Chamorros increasingly felt like squatters on their own land, the memory of the war started to change from that of being rescued to that of being reoccupied. Thus, a new struggle began.

"Frances Negrón-Muntaner's PBS-aired documentary examines Guam's turbulent experiences during the 20th century as both a U.S. territory and as a Japanese-occupied area during World War II. The native Chamorro population of the island were first colonized by the Spanish in the 17th century, who brought with them Christianity, but also allowed the people to retain their language and most of their customs. When Spain surrendered the island to the U.S. after the Spanish-American War of 1898, the new American colonial authority enforced English and American customs—without guaranteeing the local people any American freedoms. Guam was mostly used by the U.S. government as a sleepy naval outpost and fueling station, until Japan invaded the island, hours after the Pearl Harbor attack. Most of the film details how the Chamorro successfully hid U.S. radioman George Tweed from the Japanese during the nearly-three-year occupation, and how Father Jesus Baza Dueñas led the local resistance—an act of bravery that ultimately cost him his life. The liberation of Guam ushered in a new era in which the U.S. government confiscated three-quarters of the island's land mass for military purposes. While Guam's residents ultimately became U.S. citizens and many of its young people went on to serve in the military, the Chamorro continue to complain about being disenfranchised in their own land. Offering an intelligent and vigorous examination of a subject unknown to most Americans, this is highly recommended." - P. Hall, Video Librarian Magazine