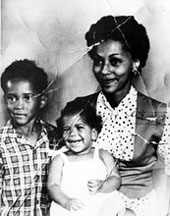 Suzanne, Suzanne
Camille Billops & James Hatch
1982
BW
30 minutes
US
Trailer and More
-  Watch Valerie Smith Keynote on Billops & Hatch Film Festival
-  Still Raising Hell Online Exhibit
Suzanne, Suzanne
This poignant documentary profiles a young black woman's struggle to confront the legacy of a physically abusive father and her headlong flight into drug abuse. Suzanne, after years of physical and psychological abuse, is compelled to understand her father's violence and her mother's passive complicity, who suffered at her husband's hands as well, as the keys to her own self-destruction. After years of silence, Suzanne and her mother are finally able to share their painful experiences with each other in an intensely moving moment of truth.

A remarkably incisive short documentary film, much more than one woman's story of abuse and addiction, SUZANNE, SUZANNE captures the nature and spirit of a troubled family.

“Camille Billops' devastating documentary on a young black woman's struggles to come to terms with her physically abusive father (dead at the time of the making of the film) as well as a mother, abused herself, unable to protect her children…" - Tambay A. Obenson, Shadow and Act Blog
"Camille Billops and James Hatch’s SUZANNE, SUZANNE (1982)... interrogates the wreckage left behind in the absence of a dead parent. The subject is Billops’s niece, Suzanne, a recovering heroin addict who discusses the abuse that she suffered at the hands of her deceased father. The film’s arresting climax has Suzanne and her mother... breaking down as they share together the memory of the beatings that they’d suffered alone." - Nick Pinkerton, Artforum
"A wrenching portrait of a woman confronting drug addiction and a legacy of abuse…" - A.O. Scott, New York Times
"Camille Billops and James Hatch’s emotionally raw SUSZANNE, SUZANNE (82) shows Billops's own California family, torn apart from the inside by domestic violence, female body-image issues, and heroin abuse." - Violet Lucca, Film Comment
"This insightful 30-minute documentary profiles a young black woman, Suzanne Browning, as she confronts a legacy of physical abuse and its role in her descent into substance abuse. The film was conceived by Browning’s aunt, Camille Billops, as a sort of cinematic drug intervention. Family remembrances revealed the truth behind the addiction: Suzanne and her mother were victims of domestic abuse at the hands of the family patriarch. Armed with the key to her own self-destructive behavior, Suzanne struggles to understand her father’s brutality and her mother’s passive complicity. After years of silence, Suzanne and her mother are finally able to share their painful experiences with each other in an intensely moving moment of truth. Directed by Billops and James Hatch, this film essay captures the essence of a black middle-class family in crisis." - National Film Registry
"One of several films Billops made with James Hatch about her family, SUZANNE, SUZANNE presents a devastating portrait of the artist’s niece, haunted by the abuse she suffered as a child and the passivity of the family members who allowed it to continue." - Nellie Killian, Tell Me: Women Filmmaker, Women's Stories
"In SUZANNE, SUZANNE, the eponymous subject was the apple of her father’s eye, and also the object of his abuse; the testimony of Suzanne and her mother in this short film is a moving examination of longstanding family trauma and the double identities women often acquire to survive it." - Maria Garcia, Film Journal International
"For Camille Billops, autobiography is a means to a new black documentary style." - B. Ruby Rich, Sight and Sound Magazine
Billops provides sister Billie and niece Suzanne the necessary space to reflect on the burdens of patriarchal abuse and drug addiction that have haunted them for years. This film is a testament to the resilience that runs in their family. - Matthew Eng, Tribeca News
"...examines the potential for violence and abuse that underlies the carefully tended facade of middle-class respectability..." - Valerie Smith, Professor of English, UCLA