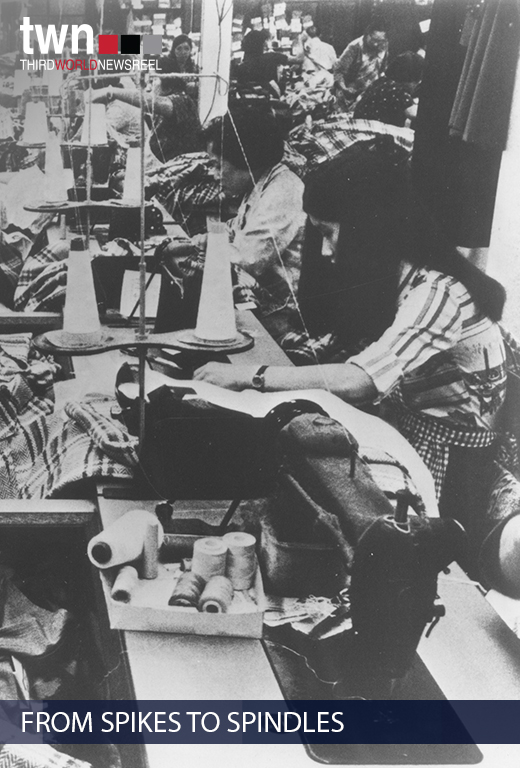 From Spikes to Spindles
Christine Choy
Producer: Third World Newsreel
1976
Color
46 minutes
US
English/Chinese
English
Trailer and More
-  Watch Trailer
From Spikes to Spindles
This raw, gutsy portrait of New York's Chinatown captures the early days of an emerging consciousness in the community. We see a Chinatown rarely depicted, a vibrant community whose young and old join forces to protest police brutality and hostile real estate developers. With bold strokes, it paints an overview of the community and its history, from the early laborers driving spikes into the transcontinental railroad to the garment workers of today.

FROM SPIKES TO SPINDLES was directed by Oscar-nominated filmmakers Christine Choy and a newly remastered HD version is now available.
"Technique for us is secondary. The people themselves have a rich life experience, a knowledge of history and their culture and community organization. And these people are far more qualified to make films than people who have learned their skills in a school." -Christine Choy

"FROM SPIKES TO SPINDLES uses a conventional mixture of narration, archival footage, talking heads, and candid on-the-street footage to bear witness to the complexity of the Chinese-American past and present and to polemicize for broader ethnic representation in American life. FROM SPIKES TO SPINDLES established Choy as a significant force in the development of an Asian-American cinema." - Scott MacDonald, A Critical Cinema 3: Interviews with Independent Filmmakers
"The work of veteran filmmaker Christine Choy has often been concerned with revising our commonly and uncritically held views, most often with hard-hitting footage that simply marvels." - All Movie Guide
"This film portrays New York’s Chinatown through an unfiltered lens, painting an honest view of a community built by laborers in spite of the powerful forces of the cops and real estate developers who run the city to this day." - Asian American International Film Festival
"Choy’s “From Spikes to Spindles” offers a fresh, vital survey of the Chinese-American experience spanning more than a century to an increasingly activist present." - Kevin Thomas, Los Angeles Times