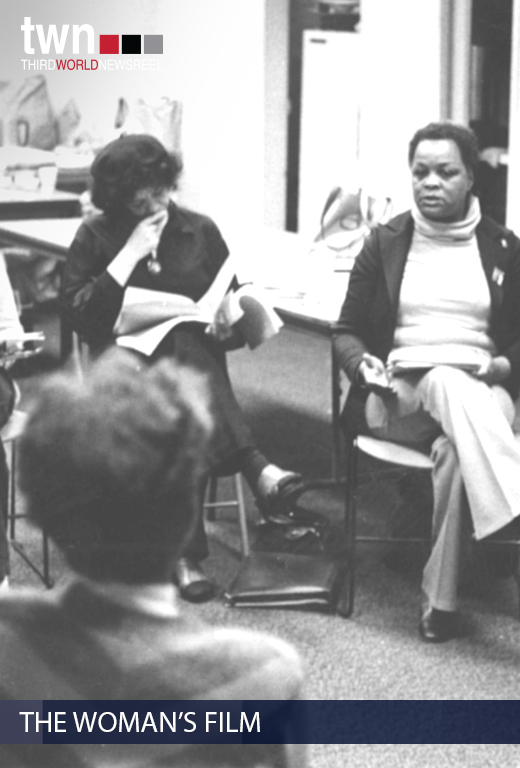 Produced collectively by women, this documentary is a valuable historical document of the origins of the modern women's movement in the United States. The film delves into the lives of ordinary women from different races, educational levels and class Filmed mostly in small consciousness-raising groups, from which the women's movement grew, the women talk about the daily realities of their lives as wives, home-makers, and workers. They speak, sometimes with hesitancy, often with passion, about the oppression of women as they see it.

THE WOMAN'S FILM was made entirely by women in San Francisco Newsreel. It was a collective effort between the women behind the camera and those in front of it. The script itself wsa written from preliminary interviews with the women in the film. Their participation, their criticism and approval were sought at various stages of production.
Third World Newsreel’s historical Newsreel collection provides contemporary audiences with a vast archive of political documentary films chronicling the social movements of the late 1960s and early 1970s.

Preserved with support from the Women’s Film Preservation Fund of New York Women in Film & Television.

"San Francisco Newsreel's film THE WOMAN'S FILM represented the perspective of a range of working-class women on how their everyday experience gave rise to an awareness of oppression. THE WOMAN'S FILM, made primarily by women members of the group, stood out as one of the first feminist documentaries of the postwar era. Its series of interviews coupled with scenes of each participant's everyday life confirmed women as filmmakers and as political activists as well as the proper subjects of documentary representations." - Bill Nichols, Introduction to Documentary
". . . an extraordinarily important movie . . ." - Nat Hentoff, Village Voice
". . . What we see is not only natural and spontaneous - it is thoughtful and beautiful. It is a film which immediately evokes the sights and sounds and smells of working class kitchens, neighborhood streets, local supermarkets, factories, cramped living rooms, dinners cooking, diaper-washing, house cleaning, and all the other "points of production" and battle-fronts where working class women in America daily confront the realities of their oppression. It is . . . A supremely optimistic statement, showing the sinews of struggle and capturing the essential energy and collective spirit of all working people - and especially that advanced consciousness which working class women bring to the common struggle." - Irwin Silber, Guardian
"The film has a well-paced rhythm, good graphics and photography, engaging music and a touch of humor that holds it all together and makes it work." - Beverly Koch, San Francisco Chronicle
". . . THE WOMAN'S FILM speaks in clear and unmistakable words from real people about what's wrong with the system and how women are especially victimized by class, racial, and sexual inequality. The anger of THE WOMAN'S FILM is positive, even optimistic. These beautiful, strong sisters are ready to struggle for a better world for themselves and their children . . . seeing and hearing them, it's impossible to think they can lose." - Ruth McCormick, Cineaste
"An incredible document of the ferment of the women’s movement, THE WOMAN'S FILM was largely shot in consciousness raising groups, where women from different walks of life came together to discuss their daily lives and develop solidarity around their growing understanding of the oppression they all face." - Nellie Killian, Tell Me: Women Filmmaker, Women's Stories
"The women in The Woman’s Film are already one step further: they have come together to form a women’s rights group and talk there about discrimination, racism and violent relationships. This slice of unfiltered oral history brings the militancy of the early 70s back to life." - Berlinale Forum 50
" A broad range of women come together as a community to share their personal experiences of their roles as wives, caregivers, and workers—and of discrimination, racism, and toxic relationships… retaining its relevance even fifty years later. - Kathrin Bentele and Gesa Hüwe, Another Eye Series